COMPUTER LAB WILL CLOSE 30 MINUTES BEFORE ABOVE TIMES

The Talladega murals are Woodruffs most ambitious and successful undertaking in this format prior to the Second World War. The Amistad mural, which would become his best-known large-scale work, marked his place -- even if not fully acknowledged -- as a significant American painter of heroic sagas and narratives.

Woodruff's first critically important mural, The Amistad Mutiny (figs. 81 - 83), was dedicated in 1939. A separate but related mural celebrating the founding of Talladega College in Alabama was completed in 1940. The Amistad Mutiny mural project corresponded with the opening of the new Savery Library and the centennial year of the Amistad mutiny:  Both mural projects paid honor to the American Missionary Association (AMA), which had grown out of the Amistad revolt and helped found Talladega College. With energy and excitement, Woodruff spent three months researching the events surrounding the mutiny. Nine months was spent painting the murals and preparing them for installation.

The Murals have been exposed worldwide as historical treasures. Steven Spielberg’s movie, “The Amistad,” is the subject of this incident. In addition to inclusion in a number of textbooks, art books, magazines, etc., they were listed by Southern Living magazine as one of the “40 Best Things to See in Alabama.”

There are currently replicas on the walls of the library, with the originals being housed in the High Museum of Art in Atlanta, Georgia.  Once the new museum is built they will be brought home and housed properly.

Three dramatic moments were chosen to tell the Amistad story: panel one shows the mutiny in progress, panel two presents the trial, and panel three depicts the return of the Mende captives to West Africa. Each panel is accompanied by interpretive text in the form of poetic verses.

Appearing in association with the first panel is:

The Schooner will be ours

Ours to steer back, by the sun, to our shore to freedom.

Our legs walking with a big stride

And our faces upward to our Mountains.

Panel two has the following lines:

The Amistad case debated Men standing up for the slaves

Men standing up with fire in their voices

For the honor of America and democracy. Circuit Court

The third panel bears the inscription:

Out of New York another ship goes, The Gentleman

This time black freedom moves in her sides

And the fighters for this freedom have sent the race

To teach the heathens in the hunter's land

The fire is lit

The Smoke is rising... rising. 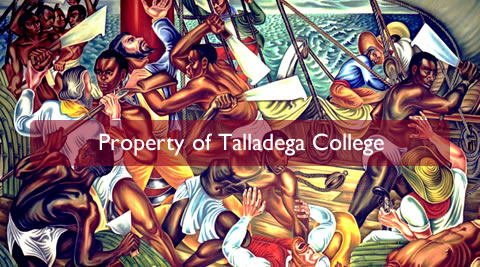 The incident began during April 1839 on the West Coast of Africa when 53 Africans were kidnapped from the Mende country, in what is now known as modern Sierra Leone. They were sold into Spanish slave trade. The men, women and children were shackled and loaded aboard a ship where many endured physical abuse, sickness, and death during a horrific journey to Havana, Cuba. 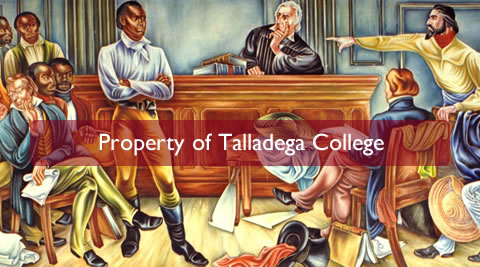 Mural No. 2, The Court Scene

The case took on historic significance when former President John Quincy Adams argued on behalf of the captives before the U.S. Supreme Court. This was the first civil rights case in America. In 1841, the 35 surviving Africans won their freedom, two years after they were captured. The Mende Association was then formed which later became The American Missionary Association. 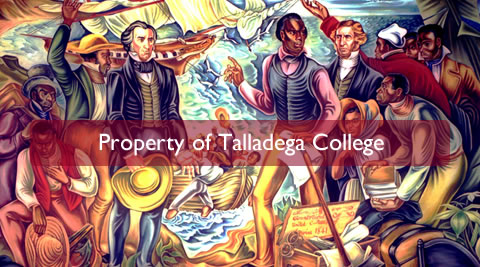 Mural No. 3, Back To Africa

The third panel represents the landing of the repatriated slaves on the shores of Africa. Here, the principal figures are Cinque, the missionaries, James Steel with his sea chest, and the little Black girls, Margue, who in later years had a son who returned to graduate from Yale University with a Ph.D. degree. In the background lie their ship at harbor, and a boatload of their party just landing on the beach. 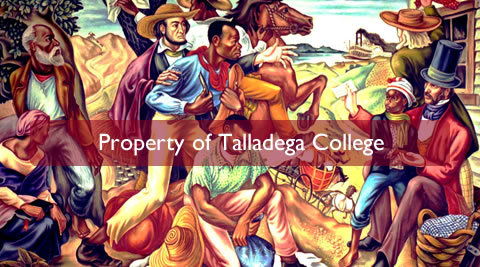 The history of the Underground Railroad is one of individual sacrifice and heroism of enslaved people to achieve freedom from bondage. Perhaps the most dramatic protest against slavery in the United States, it was an operation that began during the colonial period and later became part of the organized abolitionist activity in the 19th century, and reached its peak in the period 1830-1865.

While most runaways began their journey unaided, many completed their self-emancipation without assistance. Each decade during slavery in the United States, there was an increase in the public perception of an underground network and in the number of persons willing to give aid to the runaways. 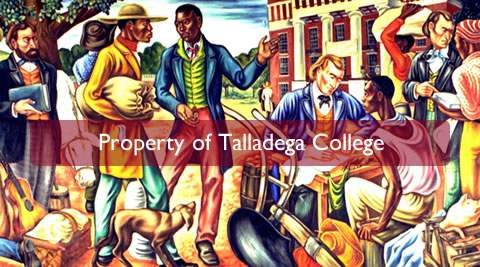 Mural No. 5, First Day of Registration at Swayne Hall

In 1867, Freedmen were poor and unable to pay tuition on the first day of registration. They, therefore, are depicted bartering with their chickens, pigs, barrels of fruit and vegetables, musical instruments, a plow, sugar cane, etc. They are advised by the counselor and curriculum coordinator on classes and what to expect in school. In the background is Swayne Hall, the oldest building on campus. 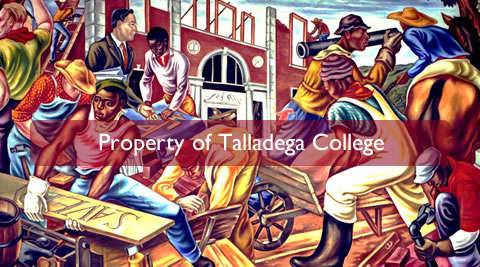 Funds raised by Talladega College, individual contributions, a grant form the General Education Board totaling $65,000, a grant from The Harkness Foundation, sale of college land and insurance on a barn destroyed by fire allowed for the construction of Savery Library. Construction began in September 1937, with Joseph Fletcher, a 1901 alumnus, serving as Superintendent of building and grounds and in charge of the construction. He viewed the library as his masterpiece. Talladega students furnished much of the labor, though in a few instances, whites worked alongside blacks.